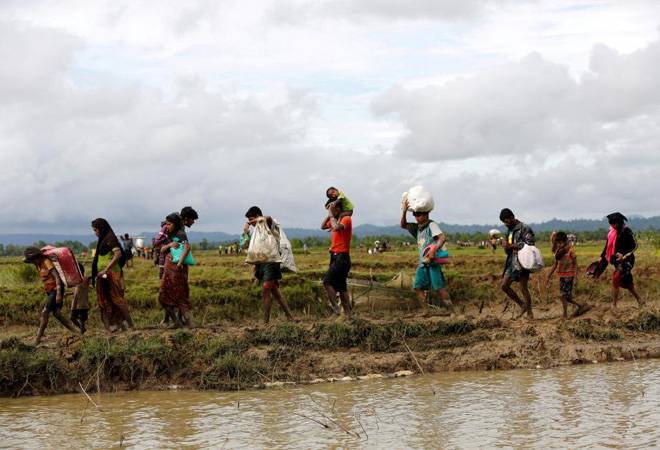 George Bush once quipped that India lived in a very dangerous neighbourhood. He failed to add that moral ambiguity was consequently built into its foreign policy. The Rohingya refugee crisis is only the latest example of this inescapable reality.

Not that Rohingya ‘crisis’ is new. The Rohingyas are 100 per cent Bengali and speak a Chittagong dialect. Most were forcibly settled in Burma by the British in an attempt to more easily control the Arakan, today known as the Rakhine State in Myanmar. Ne Win evacuated out the Rohingyas from much of Burma in 1962 but those in Arakan, remained. Efforts have continued since to move out the rest. Thus, Burman Buddhists displaced 200,000 Rohingyas in 1978, 250,000 in 1991, 14000 in 2012 and are at it again. Unofficial figures now put the refugees at 600,000.

The Burman have fortified this ethnic cleansing through the Burma Citizenship Law of 1982, which recognizes only eight ‘national races’ but not the Rohingyas. This puts the Rogingyas in the impossible position of being required to “conclusively establish” that their ancestors settled in Burma before 1948. As you can imagine, farmers dwelling in forest clearings in mud huts are not very good at storing written records to prove where their ancestors lived seventy years ago.

In August 2017, the Rakhine Commission was established by the government to recommend ‘solutions’ to the ethnic conflict. It recommended measures to improve security for the Rohingyas. These measures had the effect of pushing them across the border to the north! By September 2017, the flow into India was out of control.

The Union Ministry of Home affairs responded to the security challenge on August 8th, 2017. It empowered the States and UTs to identify and deport illegal aliens. To be fair, India is not a signatory to any international convention on refugees. The NHRC did not like this, observing that “refugees are no doubt foreign nationals but they are human beings and have a fear of persecution once they are pushed back to their native country”. It was only a matter of time before two Rohingyas – Mohammad Salimullah and Mohammad Shaqir – filed a petition on this subject before the Supreme Court.

It’s a simple case. Article 14 of our constitution requires India to “not deny to any person equality before the law or the equal protection of the laws within the territory of India.”  Article 21 prevents the state from allowing any person to be “deprived of his life or personal liberty except according to procedure established by law.”  What else does a foreigner need to obtain basic shelter in India?

There’s more too. Article 51(c), a Directive Principle of State Policy, enjoins the state to foster respect for International law. Deportation surely is against the widely recognized principle of non-refoulement (i.e. expel or return a refugee if his life or freedom is threatened on account of his race, religion, nationality, social grouping or political opinion). India has ratified, or is a signatory to, several Conventions affirming the ‘Principle of Non-Refoulement’.

Seen purely as a legal issue, it’s all quite straight forward. The Delhi High Court has held in Dongh Lian Kham v. Union of India [226(2016) DLT 208] that the principle of non-refoulement is part of the guarantee under Article 21 of the Constitution of India irrespective of nationality. The Supreme Court has held in NHRC vs Arunachal Pradesh [AIR 1996 SC 1234] that, the state is bound to protect the life and liberty of every human being, citizen or otherwise. Where is the doubt on what India needs to do?

But then, is anything ever so simple? Alternative narratives demand equal hearing. J&K has a famously xenophobic law, which prevents practically any Indian from owning property there. It’s so tight that many refugees, who crossed over during partition, when Pakistan was created in 1947 (such as the Mirpuria Sikhs) and have been in Jammu ever since still don’t have state subject certificates. Yet, 30,000 Rohingyas have been permitted to settle in and around Jammu city.

Jammu Hindus see this as a conspiracy to alter the demographic character of the area. Such is the composition of the state government that key decision making posts are largely dominated by those from the Vale of Kashmir, making it possible for them to issue residence certificates to 30,000 Rohingyas even as they deny certificates to refugee Sikhs dating back to 1947.

The Rohingyas rubbish these conspiracy theories. They claim that they were helped to board trains in Bengal and told to get off at the last station, which turned out to be Jammu. How they got residence certificates remains unexplained. To round out the rival narrative, the incontrovertible fact of the matter remains that these guys are illiterate, unskilled, do not speak the local lingo and basically hang around markets aggressively harassing visitors for handouts. Their nocturnal activities are also the subject of much complaint. Last I was in Jammu, a very smelly lady in rags practically crawled through the car window demanding money as I waited for my wife to finish her grocery shopping in Gole Market. The human dimension of the tragedy is as heart breaking as the absurdity of being required by the mandate of common decency to become the world’s garbage pit. The absurdity cuts deeper when we realize the J&K has its own constitution (Article 370, remember?).

No law requires J&K to take in refugees. If we cannot settle refugee Kashmiri Pundits back into the valley, who can resist the compelling logic of a conspiracy theory when 30,000 Muslim Rohingyas have ended up ‘settled’ in Jammu?

This brings me to the humanitarian argument, the best elucidation of which I probably heard on a Mayo college Whatsapp group! The Rohingyas are Chittagong Bongs. They have a historical right to return to Bangladesh. We got plenty of Bangladeshi maids and their rickshaw puller husbands all over India. The 2001 census disclosed that an estimated 3.1 million Bangladeshis lived in India. They are not alone. We can’t be sure but some 4 million Nepalis live here too.

Decency (and dare I say, equal treatment?) requires that we let in the Rohingyas too. Would we be equally aggravated if the Rohingyas had been Hindus? The problem with this argument is that the additional unwashed million carry a long term economic cost. If we can do nothing about the poverty of our own landscape, do we have the financial and administrative bandwidth to allow ourselves the luxury of being “crazy for phoreign?” This is where idealism confronts economic common sense. Regrettably, as we know, never the twain shall mate!

As I ponder this vexed issue, I hasten to recall that Insurance companies don’t like to provide 100% cover on a car crash. They want car owner to pay for the first Rs. 10,000/- of damage. There is logic to this. It’s called Moral Hazard. A Moral Hazard is a situation that alters behaviour such that a person takes an otherwise unacceptable risk because someone else bears the burden when things go wrong. If you know someone will pay for the damage caused, how carefully will you drive a car? Insurance companies think this is why youngsters financially dependent on their parents crash cars more often than employed youngsters.

You see such moral hazard everywhere. My colony has several dog lovers who will feed the meanest of street mutts. They know that these mutts maul toddlers around neighbouring construction sites while their mothers haul bricks up rickety bamboo ladders. Would these dog lovers still feed the street mutts if the animals routinely entered their plush bungalows and mauled their own infant children? Is this why dog lovers aren’t also mosquito lovers? That said, in feeding the dogs, the cynophilist are at least paying for the food. That’s not true for the refugee-lovers.

As I think through this issue, images of starving refugee toddlers, their bellies distended, flies buzzing around their noses and lips, refuses to leave me. At the same time, I think of all the starving toddlers who are inescapably Indian. It seems to me that this is a classic case of Moral Hazard. Who would I like to see helped first? And so a thought emerges. We should put our money where our mouth is. I would feel far more comfortable if each of us who argue in favour of the Rohingyas assign at least one bedroom in their sprawling mansions to house these refugees and pay for the food themselves in some sort of sponsored scheme. Till that day comes to pass, I must shake my head and say, “I know we should, but boss, we can’t afford it”. And that’s that.