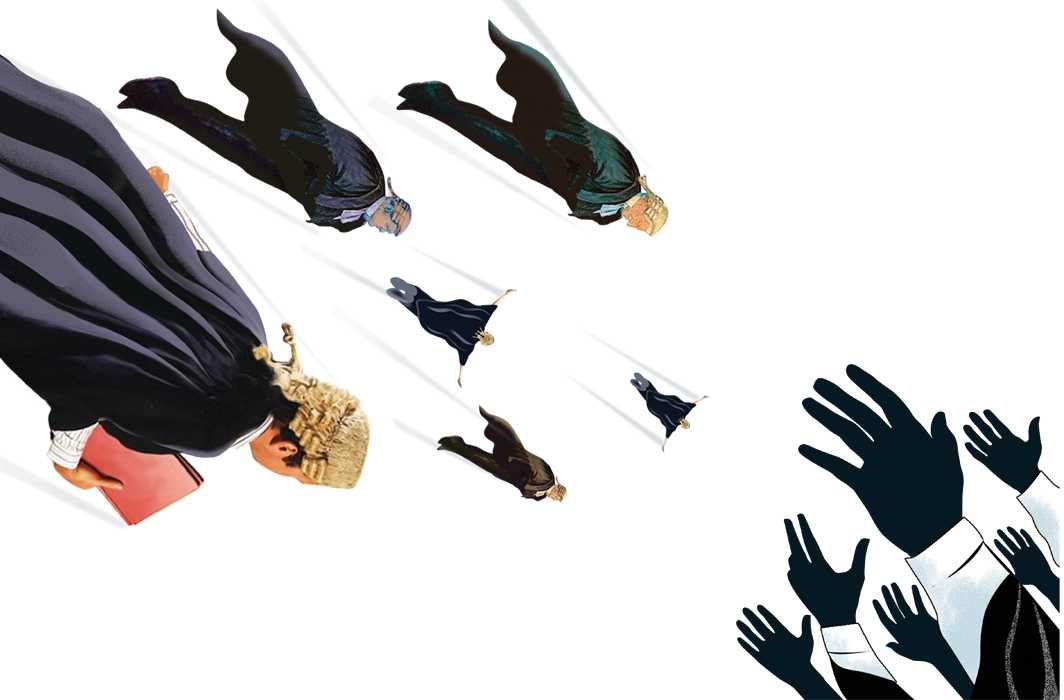 When Chief Justice JS Khehar stated on July 8 that he supported the entry of foreign lawyers in India, he drew attention to an issue that has been boosting the testosterone levels in lawyers’ canteens since Prime Minister Narasimha Rao liberalised the economy a mere 26 years back. Clearly, it’s no coincidence that we are a 5,000-year-old living culture!

Shorn of the rhetoric and the emotionally appealing collaterally motivated argument, the truth of the matter is that when India decided to liberalise its economy in 1991, it didn’t only mean that Indian lawyers could now routinely bill their foreign clients in dollars and drive about in BMWs. Soon enough, we realized that foreign money meant foreign lawyers, too. At this point, we used the same argument to protect what we thought was our turf that the “Bombay Club” led by Rahul Bajaj used to protect domestic industry. Before we are compelled to deal with competition, we argued, the government must give us time and space to level the playing field! Both groups found a sympathetic ear. The Bombay Club got the Foreign Investment Promotion Board (FIPB) and Press Note 18 (this made it obligatory on the part of foreign companies having joint ventures in India to obtain government approval), while lawyers got to keep the “reciprocity clause” in the Advocates Act. Both were designed to prolong the status quo and protect the paramount interests of those who controlled these sectors of the economy.

India rid itself of Press Note 18’s successor in 2011 and FIPB in 2017.  Lawyers now stand alone! The “level playing field argument” was probably well past its Best Before Date by 2010, but fortuitously, the “reciprocity” argument had taken hold of the Bar’s imagination. This argument is grounded in Section 47 of the Advocates Act which empowers the Bar Council to prescribe conditions “subject to which foreign qualification in law obtained by persons other than citizens of India shall be recognised for the purpose of admission as an advocate under this Act”. The issue, of course, is not the obstructing provisions of the Advocates Act since parliament can amend the law anytime it wants. Such changes would include permitting law firms to be registered as “legal practitioners” as opposed to just individuals.

The real issue is this: Are Indian lawyers truly prevented from practicing English, American or Australia law? Not a month passes when one PIO or another carrying the card of a global law firm doesn’t knock at my door asking for business. These dynamic desi youngsters have passed relevant bar exams overseas and are free to ply their trade in those countries. If foreigners want to practice Indian laws, they should be most welcome to come pass our Bar exam. We shouldn’t insist that they should be Indian citizens, too.

What does the entry of foreign law firms really mean in practical terms? If we believe that thousands of goras will descend on our sacred soil, rent apartments in Preet Vihar and do our jobs at our salary rates, it’s time to stop smoking that noxious stuff! The “India Desks” of dozens of London and New York law firms are already peopled by homegrown desi boys who have gone over, got their credentials and now adopt the roles of specialised India hands. We can more realistically expect that if permitted to do so, foreign law firms will register Limited Liability Partnerships in India, hire Indian lawyers and start practising Indian law with a minimum amount of expat help. True, some foreigner lawyers may show up to begin with but expat salaries are hard to justify and Indians would soon take over. Isn’t that what PWC, KPMG, Anderson, Deloitte and E&Y did in the accounting world? Business compulsions have an unbending logic across service sectors. This may be deflating, but we are not unique. We are most certainly not holy cows. Law firms are no different from Private Equity Investors, Merchant Bankers and Non-Banking Financial Companies. All have their regulators in varying measure, just like lawyers. It is wise not to get caught up in hoopla and spin.

At the heart of lawyers’ apprehensions lies a deep incomprehension of what a law firm actually is. Everywhere in the world, service firms in most sectors of the economy are mere brand names under the umbrella of which local professionals drive their ambitions. Be it Airtel or Samsung, service entities these days manufacture little, design little, have few assets they own but consolidate the input of their vendors to create an imagined reality that they then sell to their loyal customers as a brand signifying quality. Because the brand has a value, the owners of the brand force their vendors to create superb products and follow best practices within the envelope provided by the local environment. That is exactly what a global law firm does. The vendors inevitably are local lawyers. So are the customers.

Global brands may bring fear of commercial colonialism and marginalization of local business, but when seen from a mature historical perspective, it expands the market and plugs it into the global one. India today is the design and IT hub of so many businesses that first came here only to sell stuff. Is it inconceivable that Indian lawyers would provide cross-border service to foreigners out of their India offices? Isn’t this what liberalization is really about?

So why do we resist foreign law firms? The answer to this question depends on who “we” is. Clearly, foreign law firms wouldn’t come here to represent a party in your run-of-the-mill “Magan Lal versus Chagan Lal” civil case in a mofussil town. For decades to come, 90 percent of Indian lawyers will remain untouched by the presence of foreign law firms in India. What about the other 10 percent? They are to be found in metro cities. Here again, a lot of the cut price district court-level work is of no interest to foreign law firms. So what are they interested in? The answer is broadly four things:

On the face of it, Indian lawyers will benefit hugely by the entry of foreign law firms just as Indian accountants, merchant bankers, private equity bankers, realtors, ad agencies, hospitality companies and other service entities have. Considering how we have opened up our service sector without heartburn, it is perhaps too late to argue that the whole shooting liberalisation lot was a bad idea. Yes, there are dividends and royalties to pay to foreigners but that is true of pizzas and potato chips, too.

Finally, bear this in mind. When a service provider enters a country, it has two options: it can start a greenfield and poach employees from its future competitors, or it can simply buy out a mid-sized competitor for a hefty price, change names and get going riding on that client list and infrastructure. As time goes by, it expands by buying out other smaller law firms. The market consolidates, leaving just a dozen or two dominant players. Those who don’t sell either become very large or are wiped out. So long as the shakedown continues, like the Indian telecom market, the owners lose money and the market benefits. That is likely what India’s current law firm owners are so petrified about.